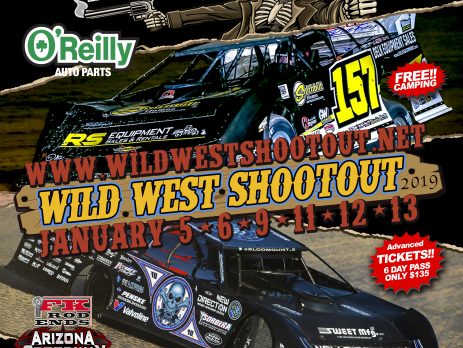 The event will draw many of the nation’s top racers as plenty of loot is up for the taking with more than $200,000 in prize money that will be doled out over the course of the six-night stand.

In addition to a point fund for the miniseries, the Black Diamond Super Late Models presented by M&W Transport will battle it out for a $5,000 winner’s share over each of the first five rounds of competition before the top prize balloons to $14,000 with $1,000 to start in the Shaw Trucking finale on Sunday, January 13.

Throw in Keyser’s Quarter-Million Challenge and some skilled and fortunate Super Late Model racer could rake in nearly $300,000 over the course of the Wild West Shootout.  The challenge offers up a $250,000 bonus to the driver that can reach Hoker Trucking Victory Lane in all six events.  Five wins will be worth an extra $100,000, parking it in victory lane on four occasions earns a $25,000 bonus and taking three wins during the week is worth a $10,000 bonus.

Ricky Weiss and Don Shaw both missed out on cashing in on the Keyser bonus in 2018 with two wins apiece as Mike Marlar and Brandon Sheppard posted the other victories.  Marlar earned the 2018 Wild West Shootout crown in the Super Late Model ranks with Sheppard scoring a $13,000 triumph in the finale.

Saturday and Sunday events will go green at 5 p.m. with Wednesday and Friday events starting at 7 p.m.