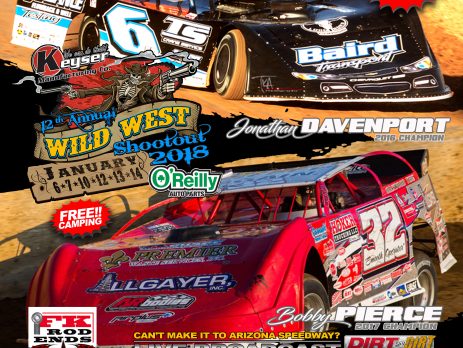 San Tan Valley, Ariz. (Dec. 30, 2017) – Keyser Manufacturing is returning as the title sponsor and O’Reilly Auto Parts is extending its contract as presenting sponsor of the 2018 Wild West Shootout, continuing the corporate tie-ins of the six-race miniseries scheduled for Jan. 6-14 at FK Rod Ends Arizona Speedway.

Coopersville, Mich.-based Keyser Manufacturing will lend its name to the mid-winter dirt-track extravaganza in the Southwest for the fourth consecutive year. In addition, for the third straight year the motorsports parts-producing giant is supporting the event’s Keyser Quarter-Million Challenge, an incentive program that offers a $250,000 bonus to a driver for winning all six Super Late Model features, $100,000 for capturing five, $25,000 for claiming four and, for the first time, $10,000 for topping three A-mains.

O’Reilly Auto Parts, one of the country’s largest automotive parts retailers, joined the Wild West Shootout family in 2017 as the presenting sponsor and has renewed its affiliation for ’18. The Wild West Shootout promotions team proudly welcomes the backing of the company that has a long history in short-track racing.

The 2018 Keyser Manufacturing Wild West Shootout presented by O’Reilly Auto Parts will pay out over $200,000 in purses over six nights of Super Late Model, USRA Modified and X-Mod racing. Tripleheaders are set for Jan. 6, 7, 10, 12, 13 and 14 at the 3/8-mile oval just outside Phoenix.